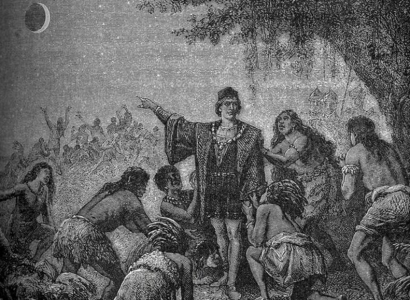 Eclipses have always fascinated me. I was young when I read the story of Columbus and the lunar (possibly solar) eclipse helped save his and his crew’s lives. I know few people know this story so I thought I would share it today in honor of the upcoming total solar eclipse coming across America next week.

On his fourth and final voyage, while exploring the coast of Central America, Columbus found himself stranded on an island.

He had to beach his last two caravels on the north coast of an island now known as Jamaica, on June 25, 1503 because of worms that ate the bottoms of his ships.

Initially, the native peoples (Arawak Indians) welcomed the castaways, providing them with food and shelter, but as the days dragged into weeks, tensions mounted.

“Finally, after being stranded for more than six months, half of Columbus’ crew mutinied, robbing and murdering some of the Arawaks, who themselves had grown weary of supplying corn and fish in exchange for little tin whistles, trinkets, hawk’s bells and other little goods. With famine now threatening, Columbus formulated a desperate, albeit ingenious plan.”

He had a copy of an almanac with him and he soon discovered from studying its tables that on the evening of Thursday, Feb. 29, 1504, a total lunar eclipse would occur, beginning around the time of moonrise.

Three days before the eclipse Columbus requested a meeting with the Arawak chief and informed him that:  Three nights hence, he would all but obliterate the rising full moon, making it appear “inflamed with wrath,” which would indicate they needed to help the sailors.

Just over an hour after moon rise, hung a dim red ball instead of a brilliant full moon. According to Columbus’ son, Ferdinand, the Arawaks were terrified at this sight and “with great howling and lamentation came running from every direction to the ships laden with provisions and beseeching the admiral to intercede with his god on their behalf.” They promised that they would happily cooperate with Columbus and his men if only he would restore the moon back to its normal self. About an hour later the moon slowly began to reappear, and as it emerged from the Earth’s shadow, the grateful Arawaks hurried away. They then kept Columbus and his men well supplied and well fed until a relief caravel from Hispaniola arrived on June 29, 1504. (See https://www.sciencenews.org/article/eclipse-saved-columbus for more details)

It was also on this same trip that he received a call to repentance. Check out the story in “Christopher Columbus, a Latter-day Saint perspective” by Arnold K. Garr.