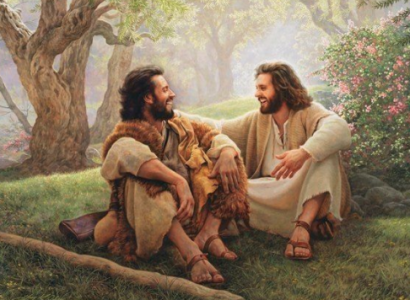 What a marvelous event it must have been when Elizabeth greeted her cousin, Mary in the spirit of prophecy. Then Mary responded by that same spirit and John leaped for joy. The testimonies of two women—the aged Elisabeth and the young Mary—each bearing a child conceived under miraculous circumstances. They, and the unborn John, all rejoice in the great event about to take place.

Christ was the rightful heir to David’s kingdom and John was rightful heir of the office of Elias. John began his ministry, to “go before the face of the Lord to prepare his [Christ’s] ways,” by leaping for joy while still within his mother’s womb. (Luke 1:41, 76; see also Luke 1:15.)

Samuel is an archetype for John the Baptist. Their mothers were barren. They both took Nazarite vows. Both Fathers were priests (Eli became Samuel’s father in learning). Samuel, as Judge, anointed David to become king of Israel. David is the archetype for Jesus. John anointed Jesus through baptism and Jesus would become the King of all of Israel.

John went forth to preach, he was ready and he had the authority to go about it. His ministry consisted of three parts:

These miracles caused the people to say in their hearts, “What manner of child shall this be!” (Luke 1:66).