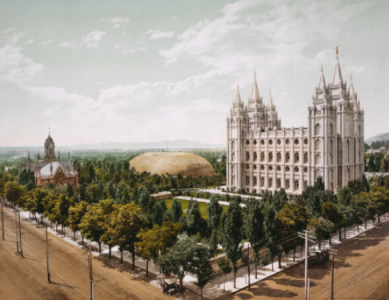 I recently wrote an article for the Millennial Instructor about the building of the Salt Lake Temple. While doing research for the article I learned a lot about the cornerstones and their placements.

At the cornerstone celebration, on April 6th, 1853, the 23rd anniversary of the Church’s organization. The First Presidency and the Patriarch to the Church laid the southeast cornerstone of the temple’s foundation, which he proclaimed the proper corner for “the chief cornerstone.” Why was this the correct corner? Brigham Young thought the congregation and especially the leaders of the church had the same question. So, at that ceremony he explained why.

Since the temple was facing the cardinal directions (N, S, E, W) the cornerstones would be on the SE, SW, NE and NW corners. Brigham Young said the ‘chief cornerstone’ would be placed at the south-east. South because on this side of the equator the south is closer to the equator and east because the sun comes up in the east. At night we walk to the east to find the light of morning. He concluded, “So we commence by laying the stone on the south-east corner, because there is the most light.”

The First Presidency or chief apostles and the Patriarch laid the chief cornerstone at the south-east corner. The second is placed on the south-west corner by the Presiding Bishopric (Aaronic Priesthood). The third on the north-west by the presidency of the High Priests quorum, the presidency of the Salt Lake Stake and the high council. And the fourth block on the north-east corner by the Quorum of the Twelve Apostles and the presidencies of the First Quorum of the Seventy and elders quorums. The Melchizedek Priesthood being on the east and the Aaronic on the west, just like the towers on the temple. The three taller towers representing the Melchizedek and the shorter ones on the west side representing the Aaronic Priesthood. This pattern begins and ends with the Apostleship that encompasses the growth of the church.

Called to Learn, Home Education, How to Homeschool

5 Ways to Enhance Your Walk with God

On the Ninth Day of Christmas

The Bee Family Tree and Fibonacci