Where Does My Help Come From?

Richard came to my door with a smile and an envelop. He exclaimed, "We're having a celebration! I have designed and created a statue that we are erecting next to Lori's headstone. We will unveil it at our celebration."

Richard's wife, had died one year earlier and he worked at a place that designed and made bronze statues. "I would love it if your family could come," he said as he handed me an invitation.

Richard and I were good friends though he was much older than I, we shared a great thirst for understanding the Hebrew culture and language within the Old Testament.

"It will be an Ebenezer!" Then with a smile "I'm raising an Ebenezer."

I wrinkled my brow, another Hebrew word I recognized, but couldn't define. "An Ebenezer?" I asked.

He smiled, "Yes, it is a Hebrew term meaning "stone of help." Samuel erected a stone monument to remind the Israelites how God helped them. I want to make a monument to honor Lori and to remember God's help in our lives." Richard's love and conviction for God and Christ always left me amazed, he knewfrom where his help came.

"Do you have a minute?" he asked, "I could tell you more." We walked to my backyard and sat down on the chairs as my children played on the swing set.

Richard began, "The Old Testament tells the story of a time when the Philistines declared war on the Israelites and their large armies were advancing toward Jerusalem. The Israelites knew they were in trouble and would be destroy without help. They went to the prophet, Samuel and pleaded with him to ask the Lord to save their lives. Samuel prayed and the Lord intervened, the outnumbered Israelites miraculously won over the Philistines."

"God intervened powerfully for them, didn't he?" I observed.

"Yes, he often did, Richard agreed, "but this time was a little different because while the Israelites celebrated their victory, Samuel pondered. He wondered how he could help them remember to turn to God instead of their idols and their own strength." Richard had been watching the children as he told me the story, but now he looked directly in my eyes. "Samuel erected a stone monument and gathered them all together and declared, pointing to the monument,"  Richard's voice deepened, "'Hitherto has the Lord helped us' and named the monument, Ebenezer or 'Stone of Help'. Samuel invited them to remember from where their help came and he promised that if they remembered they would always have His help and protection."

Richard wasn't just telling me a story, I felt he was sharing his testimony. "This statue you designed is not only about your wife, it is about showing the world your belief and love for God, am I right?"

Richard's eyes glistened, "Yes, that's the true definition of an Ebenezer - a monument to recognize and remember God's hand in all things. Speaking of definitions, I know you love words and etymology. Would you like to hear more definitions of the word 'ezer'?

"You know I would." I said. I have a habit of bringing a notepad and a pen with me everywhere I go and had pulled it out. As I wrote down the word, Richard unfolded its meaning.

"The Hebrew word 'ezer', or help, is used three different ways in the Old Testament. The first describes God when he helps the Israelites, like in the story of Samuel. The second is used to describe other nations when they strengthen or stand with the Israelites in their time of need." Richard paused to let me finish writing. He continued, "But did you know it is a description of Eve when she was given to Adam?"

Confused and very curious to know more, I glanced over at my children to make sure they were still playing nicely and in hopes they wouldn't interrupt, "No, how?" I begged, "Tell me more."

He chuckled, he was in his element. He reminded me of my father when he would say, "I've gotcha where I wantcha, now I'm gonna teacha."

"Following the creation of Adam," Richard explained, "YaHWeH or Christ said, 'I will make him an ezer kenegedo [or help meet] for him'. (Genesis 2:18) Ezer kenegedo literally means 'a helper like his opposite' today we would say, 'his other half'." Again, he paused. I thought of the implications of Eve being called an ezer and said, "Just as Christ stands with Israel as 'The Helper of Israel' so is Eve stand with Adam as 'The Helper,' am I understanding that correctly?"

"Whoa, that sheds new light on their relationship." I was beginning to "see" that I had a blurred vision of them before.

Richard continued, "Can you imagine Adam and Eve standing side by side celebrating their opportunity to go to earth together? It made them stronger in the war against Satan." he was on a roll, "We are following in their footsteps as couples. When we help God, by remembering who we are, God helps us."

Our conversation ended there with one of my boys getting tangled in the swing.

That night I wrote in my journal and pondered on how I could help my sons and daughter remember who they are and instill in them the joy I felt at that moment of being on the Lord's side, fighting at the side of my husband for God.

The answer to this piercing question came from another conversation I had with Richard. It was November and were studying the life of the Pilgrims. "I am a direct descendent of William Bradford." I told him proudly.

"Then we are cousins, because I am too." My heart soared! I had always known we had a connection, now we had a family connection!

"I've been to the obelisk of William Bradford at the top of the beautiful Burial Hill on School Street in Plymouth, Massachusetts."

Referring back to our previous conversation he said, "it is also an Ebenezer."

He was a master at creating curiosity. "Don't stop there," I again begged.

"In 1835 the relatives of William Bradford, erected an eight and half foot granite monument in his honor. You know he was the Pilgrim's governor of Plymouth for 30 years. But did you also know he knew Hebrew?"

"Yep, that's probably where we get our insatiable thirst for understanding Hebrew words. We really are related." He winked at me, just like my father would when he was trying to be funny. "William learned the Hebrew language to help him understand the Old Testament better. He also had other religious texts he read. He knew that to be a father, a leader, and teacher he needed the Lord's help."

"How is his obelisk an Ebenezer?" I asked.

"Because, at the top of his memorial obelisk is written in Hebrew, "Jehovah is Our Help."

An Ebenezer is a monument to remember God and Christ. His descendants, our cousins, must have known that William would have never erected a monument without it being in honor of his Helper, Jehovah, The Creator of the world. Oh, speaking of the Pilgrims reminds me of a quotation I read about providence and being content no matter what is going on around you. The Pilgrims were perfect examples of this. It is from the book I found in the library called Thanksgiving - A Time to Remember." He reached into his bag and pulled out a wrinkled piece of paper and handed it to me.

"Being grateful is a choice.  It's not a feeling dependent on our circumstances as we clearly see in the Pilgrims lives. They believed that God was in control - 'Providence' they called it. They responded to the circumstances of their lives with a perspective that said, 'God has allowed this for our good.'…

"Thank you," I told Richard, "What a perfect way to describe the Pilgrims and a great example to follow."

Later I put a copy of his Providence quotation in our devotional book, so we could work on memorizing it.

After the unveiling of their angel Ebenezer and the celebration, our family discussed how Samuel's monument helped the Israelites and how our great…great grandfather William Bradford's example helped the Pilgrims. Soon our children were talking about ways we could "raise an Ebenezer" to remember God's help in our lives as well. Richard proposed, one evening while he was visiting our family, that we find smooth stones and have the word 'remember' carved into them. "That way you can have your own individual ones and if you pile them together as an ancient alter, it can be one Ebenezer for the family," he said enthusiastically. "Plus I could help by doing the carvings for you." 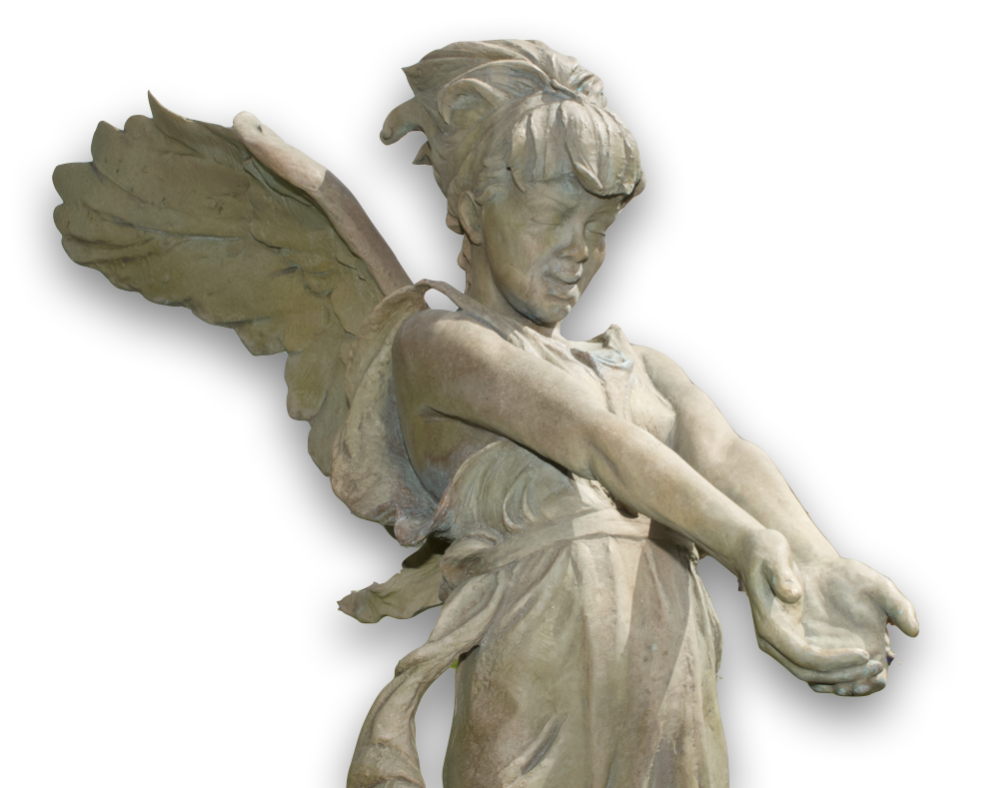 As we left each child showed enthusiasm for our new project. The next day we went to the mountain and chose our smooth stones and together we gave them to Richard.

Years later we still have our stones as a reminder of where our help comes from and we have memorized the quotation about Providence and have many well-cherished memories of Richard who passed away shortly after he carved our stones.  The angel statue with her outstretched hands is a true depiction of both Richard and Lori, messengers of Christ, with a life-changing message of love and friendship. Thank you for sharing your life, your stories, your testimony with us.

We raise our Ebenezer and celebrate when we remember Christ's help in our lives. To help us remember we say these words, "I know where my help comes from. My help comes from the Lord, my Rock, my Ezer, my Savior, Jesus Christ."

Reflection is to pause

Out of the Heart the Mouth Speaketh