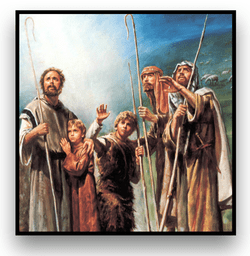 Their job that spring night was to witness the birth of the lambs. Many gave birth to two lambs and they need to know the first born so it could be marked as a sacrificial lamb.

Did you ever wonder why shepherds were given the great opportunity to be the first to go see the baby, Jesus?

Why not the bakers in town? This was Bethlehem (Hebrew for “house of bread”). [I once had a rabbi tell me there must have been a famous bakery there.] I say/go read John 6, esp. 35.

But instead, God sent the angelic message and choir to the shepherds. They were out on the hills, watching the sheep by night because this was spring, the lambing season, and they would need to witness the births of the lambs in order to separate out and mark – perhaps with a scarlet cord tied around the neck – all the firstborn lambs, which would then all belong to the Lord and His temple (Ex. 13:2).

This special night these chosen shepherds got to witness the firstborn son of God – the Lamb of God.

Shepherd and sheep are often used to illustration Christ’s relationship with his followers:

After the Shepherds witnessed the birth of our Savior they told their family, friends, and neighbors. Their message was to be told in the courts of the temple, and from there to be told among all nations of the earth. The “made known abroad the saying which was told them concerning this child. (Luke 2:16-17) for the angel declared to them that holy night, that these “good tidings of great joy” should “be to all people” (Luke 2:10).

Jesus was witnessed and visited by shepherds symbolic of him becoming our “Good Shepherd”, “Friend” and leader. How are you being his sheep and allowing him to lead and guide you?