Breastplate of Gem Stones Upon His Heart

"He that is among you without sin, let him cast the first stone." These are the words Jesus used to warn those who accused a woman of adultery (a serious sin punishable by stoning). In the Mosaic Law stones symbolized judgment and justice. The Atonement of Christ fulfilled the demands of justice and allowed mercy to enter. Stones also represented mercy in ceremonial events in their tabernacle.

The High Priest, a type of Christ, wore four more pieces of clothing than the priests who wore four white linen clothes when they "[went] in before the Lord" (Ex. 28:29.) Namely:

No article of clothing was insignificant, each item was decorative, functional and symbolic.

The High Priest represents Christ as both divine and human. He wears spotless, white linen (priests clothing) representing Christ's perfect mortal life and gold representing his divinity and colors representing the varied perfections of his character (lectures on Faith). 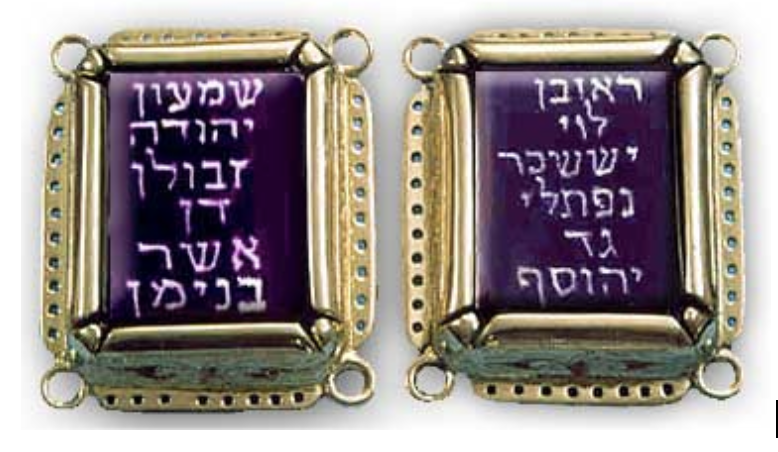 On each shoulder were two square stones made of black onyx, a semi precious stone with the same silica properties as quartz stones. Each of the 12 sons of Israel were inscribed on the stones, six on each side. It is believed they were listed in the same order as the scriptures list them, by family and then by birth (Genesis 35:23-26; Guide to the Scriptures, Israel; Exodus 28:9-10) therefore, on the right shoulder were Leah's six sons: Reuben, Simeon, Levi, Judah, Issachar, and Zebulon. On the left shoulder were Bilhah's sons, Dan and Naphtali, Zilpah's sons Gad and Asher, and Rachel's sons Joseph and Benjamin. (Exodus 28:9-10.)

These stones are called "remembrance stones" for the names of the children of Israel who were carried "before God on [the High Priest's] two shoulders as a remembrance" (Exodus 28:12) of bearing the judgment (burden) of their sins and is moved to have mercy upon them.

The stones were set in two square gold settings fixed on the shoulders of the ephod. Golden chains extended from these settings to the golden rings of the upper corners of the breastplate not to be "loosed from the ephod" (Exodus 39:21.) The lower corners were fastened to the girdle of the priest with blue ribbons.

The breastplate is a ten inch square, embroidered ornamental cloth, covering the breast of the high priest. It is set with four rows of precious stones, three in each row. On each stone is engraved the name of one of the twelve sons of Israel.

The names were not simply written on the precious stones, but "engraved," never to be removed or forgotten. These names are symbolic of his people, all of us. Through the Atonement we are engraved upon Christ's heart and hands.

The breastplate is called both the memorial and the breastplate of judgment. The High Priest, acting as Jesus Christ, wears the breastplate that he might always remember his people (see Exodus 28:29) and "bear the judgment of the children of Israel upon his heart" (Exodus 28:30; Leviticus 8:8.)

Christ, as our Great High Priest (Hebrews 4:14), bears on his heart each of us, sustaining and presenting us, his blood-bought people before God. He presents us faultless (like precious gems) before God with exceeding joy. No one can separate us from his love nor pluck us from the Shepherd's heart.

The twelve stones were arranged in four rows of three stones. They were arranged right to left. According to John Pratt, author of the article, Twelve Sons, Twelve Stones, the top row begins with Judah on a red sard or Odem stone (possibly ruby), Issachar on a tan topaz and Zebulon on a yellow green Chrysophrase (peridot). These three tribes were camped on the east of the temple. East is the sacred direction where the temple faced and from where Christ will return.

The next row is Dan on a red, black Jacinth (garnet), Naphtali on a light blue chalcedony (aquamarine) and Gad on an orange jasper (fire opal). These were the camps north of the temple or on the left hand of the priest who faced east at the head of the altar. On his right hand or south is Reuben on a royal blue Lapis Lazuli (sapphire), Simeon on a green Emerald quartz and Levi on a purple amethyst.  The last row consisted of Asher on a yellow Chysolite (chrysoberyl), Joseph on a white beryl (diamond) and Benjamin on a red and white sardonyx, rose quartz (pink tourmaline). These tribes camped on the west of the temple or behind the priest. 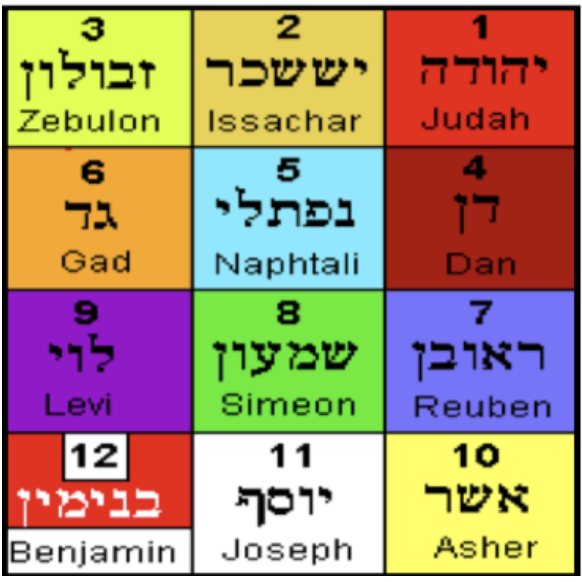 When the Israelite set up camps in the promised land Levi's tribe became the priests, Gad and Asher moved up and Joseph's inheritance, as birthright son, split into two, Ephraim and Manasseh.

This left the four cornerstones or chief tribes as Judah, Dan, Reuben and Ephraim, the first in each row. Judah, the tribe from which Christ was born, being in the south east corner position or the chief cornerstone.

Each of these cornerstones represent Christ, Judah as the Chief cornerstone, Dan as the Judge, Reuben as the first born son and Joseph as the birthright son. Judah, Christ's own tribe, judged him in HIs  life now, through the Atonement, he will judge them and the world.

Two more stones appear on the High Priest's garment. A pocket behind the breastplate was made to hold the Urim and Thummim, “an instrument prepared of God to assist man in obtaining revelation from the Lord" (Bible Dictionary). Joseph Smith described it as "two transparent stones set in the rim of a [silver] bow" (HC 4:537; JS-H 1:35).

"He that is among you without sin, let him cast the first stone." These are the words Jesus used to warn those who accused a woman of adultery (a serious sin punishable by stoning). In the Mosaic Law stones symbolized judgment and justice. The Atonement of Christ fulfilled the demands of justice and allowed mercy to enter. Stones also represented mercy in ceremonial events in their tabernacle.

THE Most Important Thing to Teach

On the Ninth Day of Christmas

Called to Learn, Holiday, Witnesses of the Birth, Word Study