Columbus Day, celebrate or not?

This week, on the 12th, we celebrate the 575th year of Columbus discovering America. There is much buzz and degrading of his character. So much so that Columbus day is hardly even looked at or noticed any more. Some States have decided to change it to “Indigenous People” day. This subject has given me much to ponder on.

My 6th-grade teacher taught me that Columbus wasn’t a great man and that he really wasn’t the one who discovered America. I trusted her and therefore believed her. It wasn’t until I was in a book club where we read the book “Christopher Columbus, an LDS Perspective” that I changed my belief.

In this book, they show how he was led at a specific time, how God was ready to have others join this “hidden land.” How Christopher followed the spirit and had the “prince of American” Angle Moroni help him. My favorite story was when he had forgotten his purpose and had fallen. He finds himself alone on the ship one day and calls upon the Lord for forgiveness, receives a special spiritual experience. Ends up being rescued and returns home to spend the rest of his life writing the “Book of Prophesy.”

How do you celebrate Columbus Day? What are your traditions?

Here are some quotations from these two books. I’ll let you decide whether or not he was called of God and if we should not remember him each year.

The Eternal God our Lord gives to all those who walk in his path victory over things that seem impossible. ~ Christopher Columbus, Book of Prophesy

“At this time I have seen and put in study to look into all the Scriptures…which our Lord opened to my understanding (I could sense his hand upon me), so that it became clear to me that it was feasible to navigate from here to the Indies and he gave me the will to execute the idea… No one should be afraid to take on any enterprise in the name of our Savior, if it is right and if the purpose is purely for his holy service… The working out of all things was entrusted by our Lord to each person…in conformity with his sovereign will…” ~ Columbus. Book of Prophecies. Fols. 4,5 rvs.,6.

“The temple work for the fifty-six signers of the Declaration of Independence and other founding fathers has been done.  All these appeared to Wilford Woodruff when he was President of the St. George Temple.  President George Washington was ordained a High Priest at that time.  You will also be interested to know that according to Wilford Woodruff’s journal, John Wesley, Benjamin Franklin, and Christopher Columbus were also ordained High Priests at the time.  When one casts doubt upon the character of these noble sons of God, I believe he or she will have to answer to the God of heaven for it.” Ezra Taft Benson (Christopher Columbus, an LDS Perspective, pg. 72) 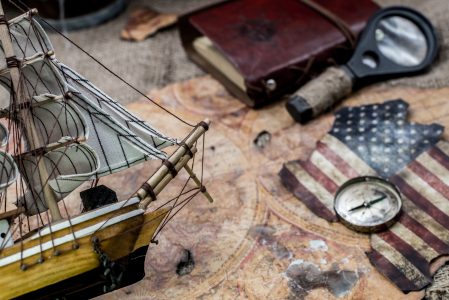