(written by Tresta Neil 2017 for the Millennial Press, Rock volume, not published)

God uses the geography of the continents to teach us. One main message he taught was we need not fear. Christ used Mt. Carmel, a symbol of richness and fruitfulness, in several metaphors. He used this same Israelite mountain in modern prophesy, "As the dews of Carmel, so shall the knowledge of God descend upon the Saints." (D&C 128:19) Understanding the geography of Mt. Carmel (Hebrew Kerem-El means "Garden of God" see Isaiah 33:9; Jerimiah 50:19) and how it averages 250 dew-nights a year because of its proximity to the Mediterranean Sea helps give us a visual of how much knowledge God wants to give his Saints and how we need not fear ignorance.

The story of Daniel's interpretation of King Nebuchadnezzar’s dream teaches us, through geography and history, to have courage in sharing the gospel. First, Daniel tells the king what he saw in his dream. "Thou, O king, sawest, and behold a great image. This great image, whose brightness was excellent, stood before thee; and the form of thereof was terrible. This image's head was of fine gold, his breast and his arms of silver, his belly and his thighs of brass. His legs of iron, his feet part  of iron and part of clay." (Daniel 2:31-35) This impressed King Nebuchadnezzar and was he willing to hear the interpretation.Daniel explained the great image's body represented five different kingdoms. Each kingdom being slightly inferior to the one before. Daniel revealed to King Nebuchadnezzar that he, and his great kingdom, was like the head of gold (Dan. 2:38). His kingdom would be overpowered by a weaker kingdom and that pattern would continue until all the land becomes a mixture of smaller, strong and weak, nations who "share the control of the earth." (SWK) like the pieces of iron and clay in the feet.

Most of Earth's recorded history took place in the northern hemisphere. Nebuchadnezzar's rock image lays across the Asian and European continent with its head stretching over Asia and its toes reaching across the ocean to America. Orson Pratt gave us a detailed explanation of these countries through history. (see "The Setting Up of God's Kingdom in These Latter Days." Discourse by Elder Orson Pratt, delivered in the Tabernacle, Salt Lake City, Sunday Afternoon, February 4, 1872. http://scriptures.byu.edu/#:t249fb:j15)

Daniel continued the interpretation, "Thou sawest till that a stone was cut out without hands, which smote the image upon his feet that were of iron and clay, and brake them to pieces. Then was the iron, the clay, the brass, the silver, and the gold, broken to pieces together, and became like the chaff of the summer threshing floors; and the wind carried them away, that no place was found for them: and the stone that smote the image became a great mountain and filled the whole earth." (Daniel 2:31-35)

The stone is a symbol of the last kingdom that will cover the earth and last forever. This kingdom will not be created by man, but will be established by an angel (Revelations 14:6-7) in behalf of the creator of stone, whose right it is to reign (D&C 58:22) and govern the nations of the earth, even Jesus Christ.

"The Church of Jesus Christ of Latter-day Saints, was restored in 1830 after numerous revelations from the divine source [including angles]; and this is the kingdom, set up by the God of heaven, that would never be destroyed nor superseded, and the stone cut out of the mountain without hands that would become a great mountain and would fill the whole earth." (https://www.lds.org/general-conference/ 1976/04/the-stone-cut-without-hands?lang=eng)

The Saints that walked the plains and their enemies that pushed them to "go beyond the Rocky Mountains" had no idea they were fulfilling this prophesy. No doubt any of them entertained the idea while they were being driven that their new home would be the place for God's Kingdom to roll forth.

Orson Pratt pointed out that from the top of the Rocky Mountains, the backbone of America, the stone was cut without hands and is rolling forth. Missionaries are being sent out throughout the world from the headquarters of the Church. The stone will roll forth first to North and South America and Europe, the feet of this great statue and then to remnants of the Roman Empires in East Europe and Africa. Finally it will sweep across the Macedonian/Greek and Persian Empires and across Asia until the whole earth has heard the gospel of Jesus Christ and accepted him as their Lord and King.

Truly, we need not fear the ways of the world God is sending the dews of Carmel upon the Saints. He teaches us through the geography of the Earth. We are a part of that stone, we belong to the Kingdom of God on Earth. As we share the gospel and help others turn to God we are helping the stone roll forth and fill the whole Earth. Roll On!

*ACTIVITY - color these different metals on a map in their appropriate areas. As you color think about how the gospel of Christ has spread across North and South America (the toes of the great statue), reaching across to Europe (the feet) and into the remnants of the Roman Empire in Eastern Europe. 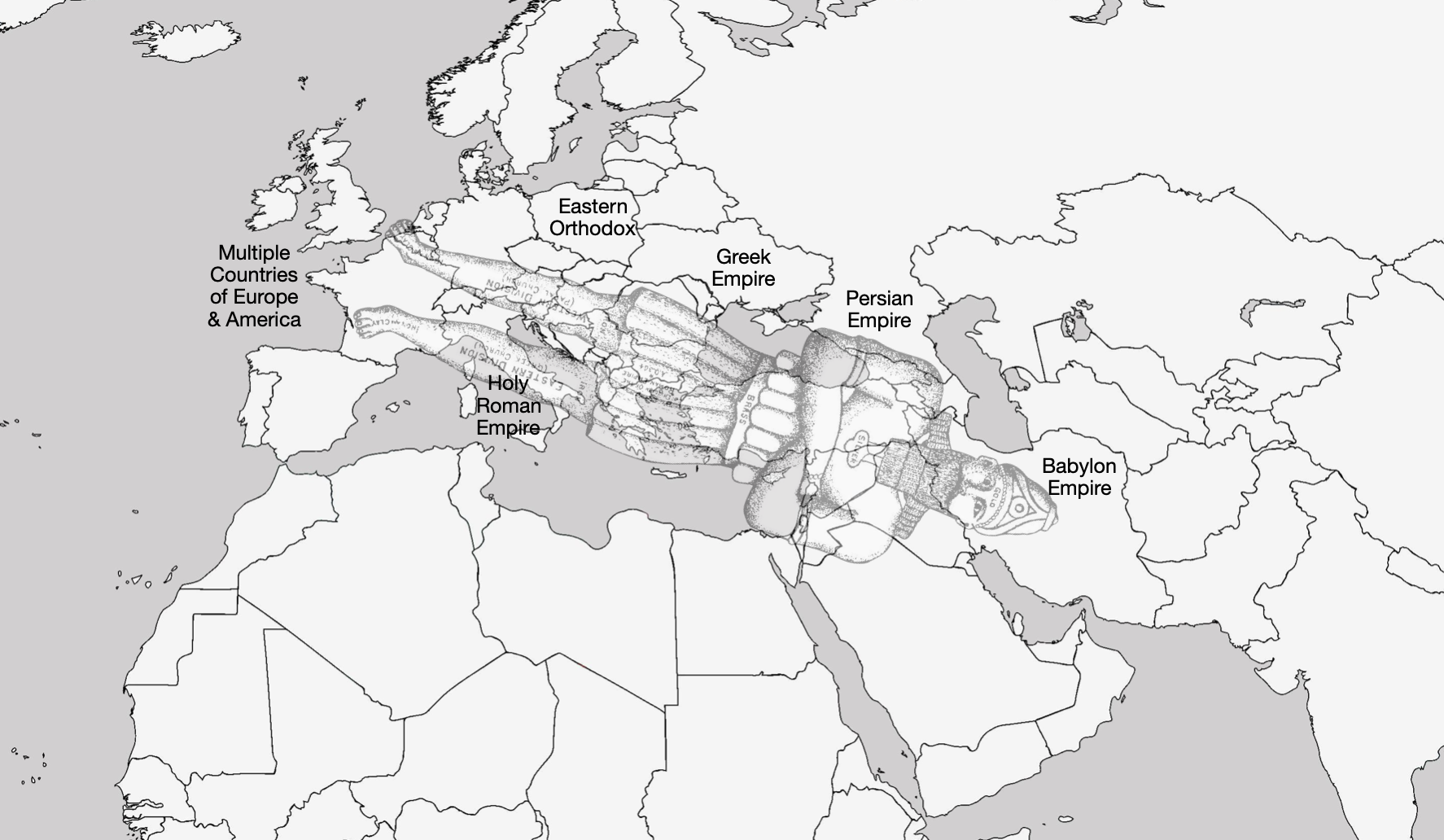 Passover and Cleansing the Temple

To Dream or Not to Dream

His Name Shall Be in their FOREHEADS