(written for Millennial Press, Gathering of Israel edition, 2019, not published)

Have you witnessed the majesty and power of God? Did you know that “the Heaven’s Declare the Glory of God?"1 When we look into the heavens on a beautiful clear night there is much more than twinkling stars. With “eyes to see”2 we will recognize how “all the planets which move in their regular form do witness that there is a Supreme Creator”3 and the “stars also give their light, as they roll upon their wings in their glory, in the midst of the power of God.”4 In the book of Moses, we read that “all things are created and made to bear record of [God], . . . things which are in the heavens above, and things which are on the earth . . . : all things bear record of [Christ] ”5  The stars are no exception.

The study of astronomy dates back to the ancient prophets.6 Abraham kept a record of “the fathers, even the patriarchs, concerning . . . the creation, and also of the planets, and of the stars, as they were made known unto the fathers.”7  Studying the position of the stars and planets in conjunction with the holy scriptures is a key that can help us understand the “signs” of the Second coming. However, we must remember that everything God creates Satan has a counterfeit which he clearly has with the zodiac signs through astrology. This has caused fear and many avoid the subject all together.

This article focuses on evidence discovered and provided to us by the research of Frances Rolleston8, the books of E.W. Bullinger9 and J.A. Seiss10 and the articles of John Pratt.11 These works through the names of the stars tell us a story - the story of Christ and the births of the twelve sons of Israel.

What is a Constellation?

The constellations were not made up from what they looked like in the sky, on the contrary, they were given to us through the names of the stars, the images are to remind us of the stars. Think of it as a pneumonic to help you remember the image so you can remember the story.

A constellation is a group of stars, the image and its meaning is given to us by the names of the brightest to the least brightest stars.

Pratt explains the rotation of the stars like a clock.

“The sun, moon, and planets are like the hands on a huge clock, with the twelve zodiac constellations through which they move being the twelve numbers on the clock face. The Lord uses his clock to time key events in world history.”12

What is a Zodiac?

The sun only travels through or “touches” twelve constellations. The Hebrews called them “mazzaroth”13 or “a garland of crowns.”We call them “zodiac” from the Greeks meaning “animal path,” probably because there are six animal figures within the zodiac. The sun is “in” a constellation if the constellation is in the east as the sun rises in the morning. These twelve constellations approximately correlate with our twelves months of the year. It takes the sun three to five weeks to go through one zodiac constellation. 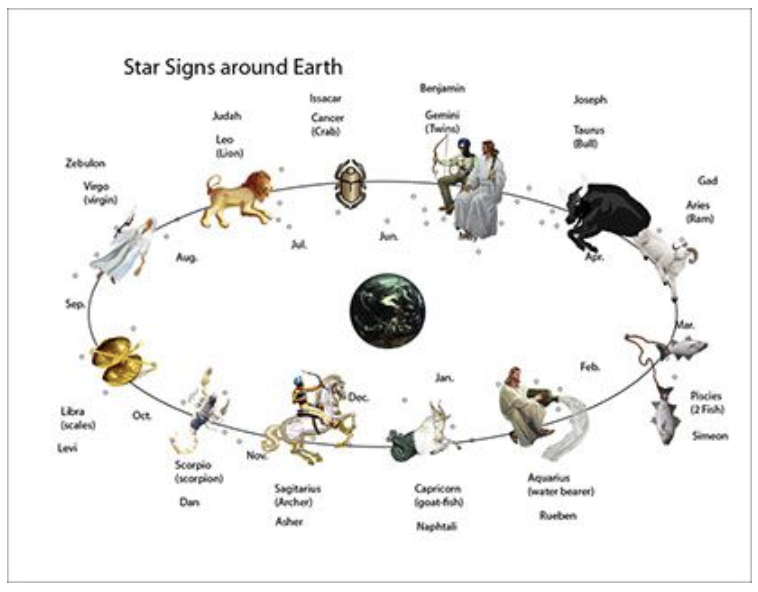 Pratt references the apocalyptic book of Enoch14 that tells us that he received the constellations from God, passed them to Noah who handed them to his children until Abraham. He studied them and shared them with his people and the Egyptians who shared them with the Greeks. Through the years the stories have changed, but the star names have not.

The Bible and the Stars

The Bible and the stars stand as witnesses of God. They both testify of the existence of God and they are forms of communication. They also reveal knowledge. Psalms 19:1-4 compares the heavens to the scriptures.

The heavens declare the glory of God,

and the sky above proclaims his handiwork.

Day to day pours out speech,

and night to night reveals knowledge.

There is no speech, nor are there words,

whose voice is not heard.

Their voice goes out through all the earth,

and their words to the end of the world.

Only the heavens have been available to all people. They covey messages and information to the world. God created the heavens to communicate his “signs.” Notice how he worded it, “Let there be lights in the expanse of the heavens to separate the day from the night. And let them be for signs and for seasons, and for days and years…” (Genesis 1:14) The first reason God created the heavens was for “signs.” Signs provide guidance, information and warn us. The stars and scriptures are witnesses of God’s existence and ways he communicates messages to us.

The Twelve Tribes and the Constellations

In the Hebrew tradition each of the twelve tribes are associated with the twelve constellations of the zodiac.15 In the Old Testament, Joseph dreamed of the sun, moon and eleven stars bowing down to him.16 The eleven stars were understood to be his brothers. Could not these stars actually be constellations? There are three ways this connection is made.

First, many of the meanings of the son’s names give us clues as to their symbol which often that correlates with a constellation.

Second, the blessing each son received from their father, Jacob, give us clues as to what their symbol or the meaning of their associated constellation.

Lastly, the work of John Pratt with the Mayan Sacred Round, Enoch calendar and the Hebrew Calendar17 shows the importance of the holy days. He discovered that each of the twelve were born on holy days. He shows how each of these holy days correlate with a constellation. Let’s explore four examples. 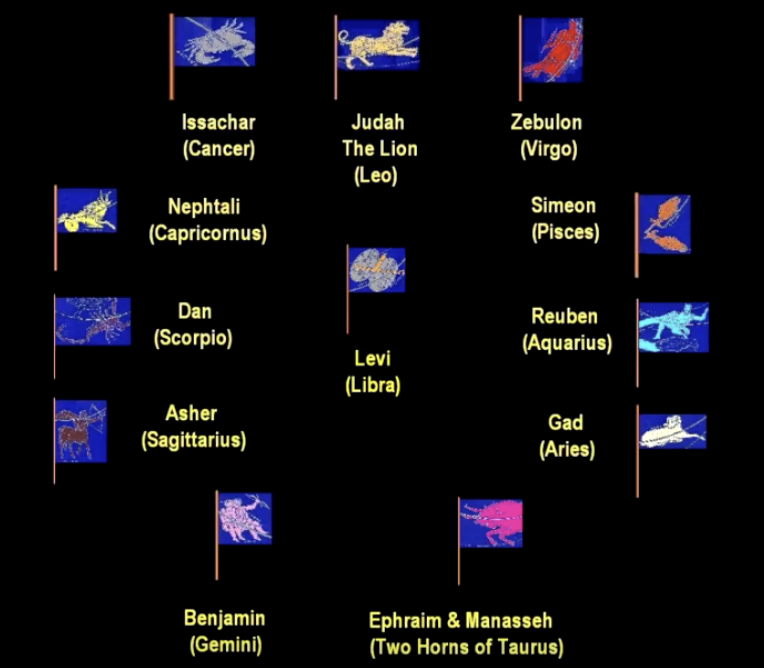 Ezekiel and John had a vision describing the four headed figure, one head of a man, another a lion, an ox, and a head of an eagle. Each head matches the four principal tribes and the four "cornerstone" constellations.18 The principle tribes in Israels camp are: Reuben, Judah, Dan and Joseph which correspond with the gemstones on the high priests breastplate.19 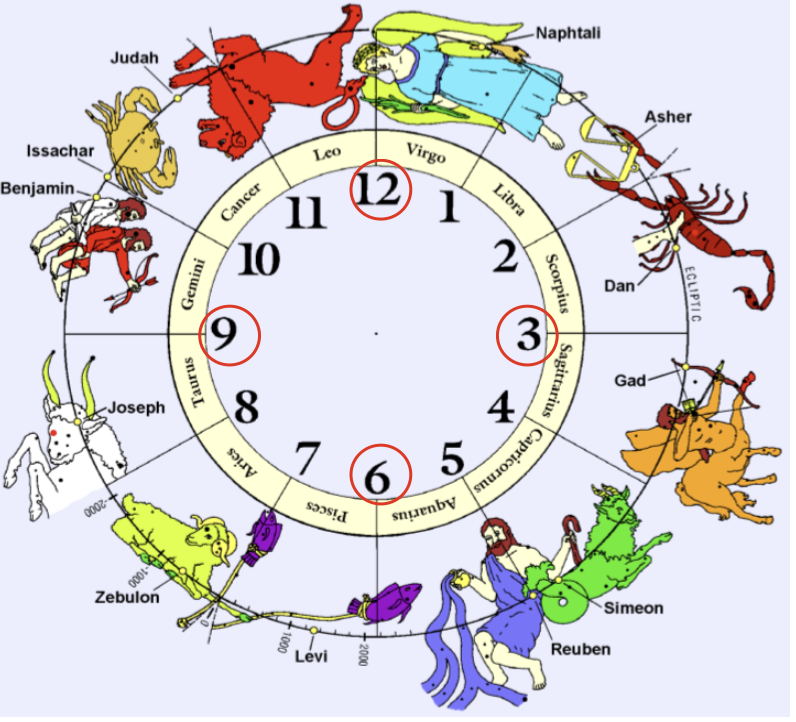 Reuben is compared to a man and to water which matches up with the Water Bearer (Aquarius).20 Judah is compared to a lion.21 His name means “praised” referencing the “Lion of the Tribe of Judah”22 or King of Kings.  Dan is said to be a serpent (counterpart of an eagle) like the Scorpion (Scorpius).23 His name means “judge.”  Moses compared Joseph’s twin sons, Ephraim and Manasseh, to the two horns of the wild ox or Bull (Taurus), and it was Joseph that would “push the people together from the ends of the earth”24 referring to the gathering in the last days. These four sons are the leaders assigned to the four directions25 and these four constellations are evenly spaced around the circle as are the four points of a compass.26

The constellations themselves tell of Christ, His Story from the pre-existence and creation of the world to His second coming. Are we reading and understanding the language of the stars? Are we seeing the “signs” in the heavens? Neal A. Maxwell asked, “God is giving away the spiritual secrets of the universe, but are we listening?”27 Much can be learned through the study of the stars and the scriptures together especially about the gathering of Israel and the preparation for the Second Coming.

Symbolism of the Brass Brow

5 Ways to Up Level Your Happiness

Symbolism of the Golden Calf